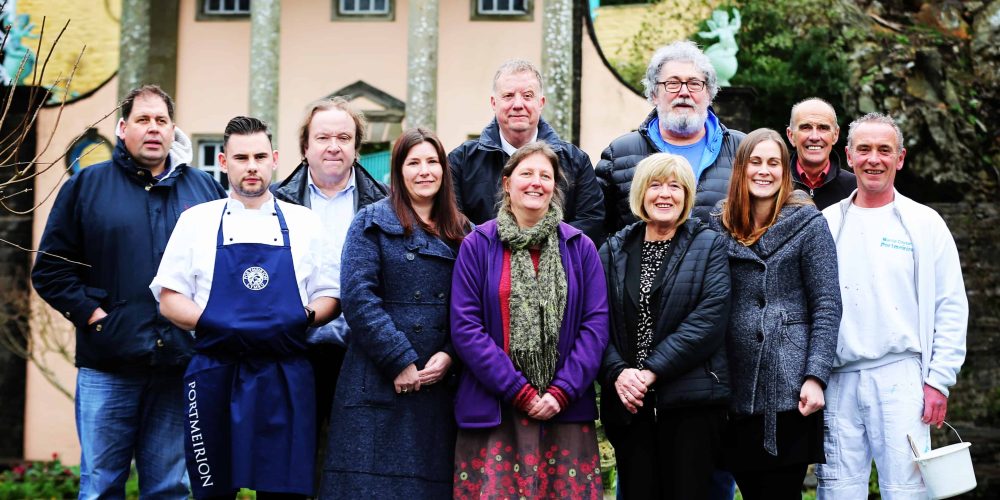 The magical Italianate village of Portmeirion is to be the star of a new tv series on ITV Cymru
Wales.

The Village meets some of the men and women who help to run what is one of Wales’ premier
visitor attractions. From the chef and the gardener to the painter and decorator each of them tells what it takes to keep such a landmark destination in tiptop condition.


Cameras have been given unique access to show a year in the life of the iconic community near
Porthmadog in Gwynedd. They capture the beauty of four glorious seasons and the life cycle of the men and women who are the guardians of the village that has been called ‘an illusion; a playful contradiction’. Portmeirion looks like an ancient Italian village. But it was created between 1925 and 1973 by the visionary architect Sir Clough Williams-Ellis. Now his grandson, Robin Llywelyn leads the team which runs the village. Robin, the Managing Director of Portmeirion Ltd tells the programme: “Portmeirion really is the embodiment of Clough’s vision of the harmony between the manmade and the natural.” “What Clough abhorred over anything was that the place should become some sort of a museum. “He wanted the place to live and breath and be somewhere that inspired and allowed events to take place and things to happen.”


Portmeirion was the backdrop for the pioneering Sixties TV show The Prisoner. Now it attracts
some 200,000 visitors a year. The new series features a wide range of characters – some of whom have worked at Portmeirion for decades. Martin Couture has been there for 42 years – starting when he was just 16 years old. Now the Head Painter and Decorator, he tells the programme how he maintains the colours and style laid down by Sir Clough as the village was built. “We have got about 80 different colours and we have got to keep a record of every colour we use. “We write everything down in case the building needs re-rendering. We know then that we have got the correct colour to put them back again as Sir Clough originally put them.” Head Housekeeper Rhian Roberts also features in the series. She helps look after the two four star hotels and range of holiday cottages on the site.
“Our job is to keep the people who come here as happy as possible and that’s our aim really, isn’t it?”
“I have been here 22 years. Why have I stayed so long? Well, I’m very fond of the place. I enjoy my work.”

Another star of the show is Location Manager Meurig Jones who looks after many of the film
crews who visit Portmeirion from around the world. He also tells visitors about famous VIPs who have stayed in the village, from Beatles manager Brian Epstein who had a cottage at Portmeirion for several years in the early 1960s to Jerry Lee Lewis and George Harrison who had his 50th birthday party there. “Clough always wanted Portmeirion to appeal to creative people and of course it’s a wonderful venue for a whole range of different things. “It’s a place you do get very attached to. I can’t imagine going anywhere else, to be honest.” The ITV series is the latest to celebrate the diverse communities of Wales. It follows The Mountain , looking at people living and working around Snowdon in 2015, The Harbour , featuring Tenby in 2017 and The Strait – highlighting communities around the Menai Strait in 2018. Both The Harbour and The Strait were broadcast across the ITV network. The Village will also be broadcast on the ITV network on a future date. Each of the hugely successful series were created by Aled Llŷr from boutique independent production media Slam Media in partnership with Anglesey-based brand design and media company Cread Cyf and its managing director Stephen Edwards. Said Aled: This series is a tribute to a remarkable place and special people who bring it alive. It’s been a joy to capture their passion and love for this unique Village. Added Stephen: “It’s been a magical year of filming. We can’t wait for people to see the series.” Jonathan Hill, ITV Cymru Wales Executive Producer on the series called it “a remarkable insight into the running of one of Wales’ most famous and iconic locations”. Added Robin Llywelyn: “ It was a pleasure having the film crew with us over the course of the past year and we are very much looking forward to the series. “We hope that everyone enjoys watching!” The series airs on ITV Cymru Wales at 8pm on Monday 15th April and will then be available online on itv.com/walesprogrammes