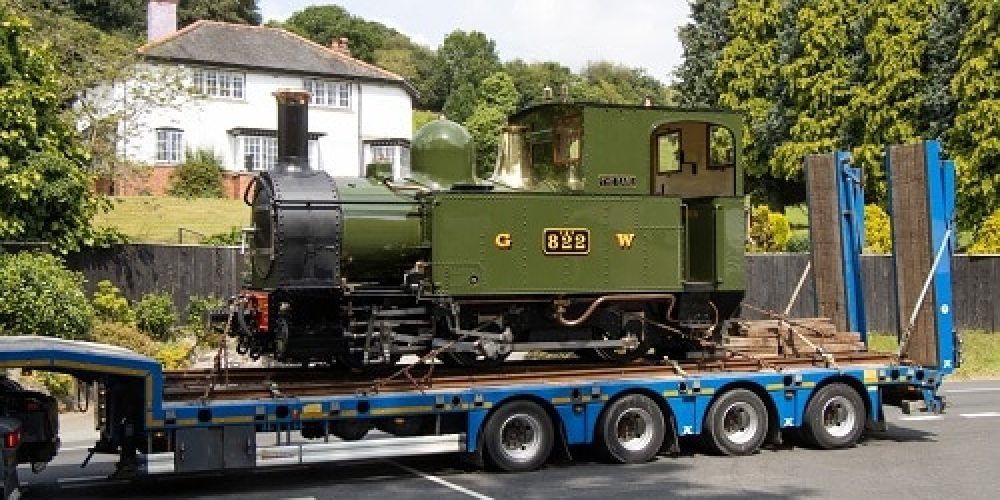 The Welshpool & Llanfair Light Railway (W&LLR) welcomed one of its original locomotives back to the line on Monday 26th July, in a lvery it has not worn for more than 70 years.

Beyer Peacock 0-6-0T ‘The Earl’, built in Manchester in 1902, had been sent to the Vale of Rheidol Railway (VoR) for a major overhaul in 2019, following the expiry of the locomotive’s 10-year ‘boiler ticket’. The most extensive work carried out on the engine for many years included a complete dismantling, and was due to be completed in 2020. However it was delayed by the Covid pandemic which closed the VoR’s workshops at Aberystwyth for several months.

The pandemic also threatened to delay the overhaul for funding reasons, due to the significant loss of revenue suffered by the W&LLR while the line was unable to run services through much of the 2020 operating season. However a ‘Keep The Earl on Track’ appeal launched by the railway attracted an enthusiastic response from supporters, raising £95,000 to complete the restoration in just three months.

The return of The Earl was not before time – with the boiler tickets on both sister Beyer Peacock ‘The Countess’ and 1927-built Kerr Stuart 0-6-2 ‘Joan’ expiring over the winter of 2020-21, and the effects of the pandemic delaying the restoration of the 1944-built France-Belge 0-8-0T ‘Sir Drefaldwyn’, services so far in 2021 have relied on 1900-built 0-6-2T ‘Zillertal’, on hire from the Zillertalbahn in Austria.

As soon as running-in turns and checks are completed The Earl will take its place on the W&LLR roster. These will include hauling special ‘Great Western Trains’, pairing the loco with the railway’s replica Pickering carriages and original freight stock representing the era between 1923 and 1947, when the W&LLR was owned by the Great Western Railway.

As part of the overhaul The Earl’s British Railways-era black livery has been replaced by GWR green. This livery has in recent years been worn by The Countess and on 28th July the two were posed together in Llanfair yard, the first time they had both appeared in this livery in more than 70 years. The date was significant, exactly 60 years since The Earl first returned to Llanfair in 1961 following six years of storage in Oswestry after British Railways closed the W&LLR in 1956. At that time the loco was central to the plans of the fledgling preservation company, which ran its first passenger trains in 1963.

The Countess will now spend a period on show in the W&LLR’s display sheds at Welshpool before its next overhaul. Part of the reason for this is to separate out the boiler tickets of the two Beyer Peacocks, so that in future the W&LLR will always have at least one of its original locomotives in service.

“We are absolutely delighted to have The Earl back with us,” said W&LLR chairman Steve Clews. “The Vale of Rheidol team has done a superb job on the overhaul and I’m sure all those who contributed to the appeal, to whom we are very grateful, will be impressed with the standard of the work and looking forward to seeing the loco back in action.” More/

Meanwhile the Vale of Rheidol transporter that delivered The Earl on 26th July then loaded up the W&LLR’s former Sierra Leone Government Railway Hunslet 2-6-2T No.85, built in 1954 and repatriated by the railway in 1975.

While very popular with W&LLR footplate crews, this locomotive has not worked on the line since 2010, when its boiler ticket expired. The VoR is to carry out a detailed condition assessment of No.85 as part of a joint project between the W&LLR and the UK-based Friends of the Sierra Leone National Railway Museum (FoSLNRM). The railway is officially affiliated with the museum and several members are involved with both orgnaisations.

The condition assessment, financed from a fund started by W&LLR members, will provide a detailed report on the feasibility and likely costs of restoration of the loco, with the potential for the FoSLNRM to raise the funding for the restoration to be carried out. Assuming the project goes ahead the aim is for the work to be completed by 2025, in time for No.85 to appear at the 200th anniversary celebrations of the Stockton & Darlington Railway, the world’s first public railway opened in 1825.

· The Earl will play a central role in the W&LLR’s ‘Transport Treats’ enthusiast event on 4th-5th September, held on what is traditionally the railway’s Steam Gala weekend – the event will be to a smaller scale than the Gala, and the traditional accompanying Llanfair Garden Railway Show is not being held this year, but enthusiasts are still promised plenty to interest them including special train services and road steam and vintage vehicles at Llanfair. More details of Transport Treats will be posted on the W&LLR website www.wllr.org.uk and social media feeds leading up to the event – these feeds will also include details and booking facilities of forthcoming train services hauled by The Earl.